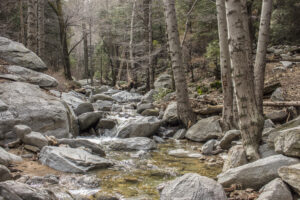 While there are a few homes on the way up Highway 18 like the Waterman Canyon community, Crestline is the first unincorporated area of San Bernardino County that could be called a town.

Crestline has the lowest elevation of any other town on the mountain with Lake Gregory being at about 4500 ft. Parts of Crestline may go as high as 5000 feet on the outer edges. Crestline is the home of the beautiful Lake Gregory that has year around fishing and kayaking and summer recreation activities like swimming and boating from Memorial to Labor Day. There are fees for fishing and kayaking and entrance fees for the summer recreation areas.  Also remember to pay for the parking. You can purchase a yearly parking pass that can save money if you come often or live close by.

Crestline has a supermarket called Goodwin’s with a hot lunch counter that also serves salads, sandwiches and blended drinks along with a bakery. Something you don’t find everywhere is an old-fashioned ice cream parlor right in the middle of the store where you can also buy fine handmade chocolates.

Crestline also has a bowling alley with a Subway sandwich shop; a pawn shop, 3 Mexican restaurants, Crestline Café, Bear Restaurant, a Chinese restaurant and a couple of coffee houses. Lots of small antique type shops and plenty of real estate offices. 2 gas stations, one at a 7-Eleven and 1 bank and a Credit Union.

Lake Drive runs along the north side of the Lake Gregory over to the 5 corner intersection of Lake Drive, Delle Drive, Dart Canyon, San Mortiz Drive and Arosa Drive. North of Lake Drive we have a very nice neighborhood often referred to as the W Section where there are streets called Wylerhorn, Wabern, Wald Court and Weisshorn. At the top of Weisshorn is the access to what some refer to as the Beverly Hills of Crestline known as Mile High Park.

At the very bottom of the W Section there are a few streets that begin with Z such as Zurich, Zell, Zuger and Zermatt. Moving east on Lake Drive we encounter Edelweiss which will lead us into the D Section with names such as Darfo, Davos, Dorn, Dunant and Delle which is the other end of the access to the D Section where it meets Lake Drive at the 5 corners.

Continuing east past the 5 corners we can drive down Dart Canyon Road with houses on either side. Dart Canyon Road also gives us access to another area of Crestline known as the Masonic Development which tends to have smaller homes on smaller lots and is a septic area. Up to this point the other areas identified are on sewer. The rule is any where that could drain into Lake Gregory is on sewer and properties that would drain away from the lake are on septic or holding tank. However there are some septic areas even in the outer edges of the San Mortiz Development. As we continue east on Dart Canyon Road we come to some 5 and 10 acre ranches, most of which are on septic, well water and propane gas.

Dart Canyon Road which is in Miller Canyon becomes a dead end as it reaches the last few ranches.

South of Lake Drive, behind “downtown Crestline” is a neighborhood of mostly older with some newer homes and it is very flat in this area. As the streets work their way south up the hill there is a very nice, heavily treed area which I think is every bit as nice as the San Moritz Development and we find streets such as Bernard, Altdorf, Albrun, Jungfrau, Lausanne, Cresta, Lakeview, Scenic, Bowl and Lynx.

At the top of this last section is Crest Forest Drive which borders Crestline on the south; Arosa is on the east with the sections of the Masonic Development, also known as Valley of the Moon mostly east of Arosa; Lake Drive and the communities north of Lake Drive then disperse into open land on the north Side. On the west as you head out of town back to Highway 18 you come across Knapps Cut Off which will take you down to the Valley of Enchantment (VOE) via Highway 138. There are some nice homes in VOE and there are also a number of streets where homes are lined up right next to each other. You will see that there is some lack of pride of ownership with many of these properties. This section tends to have a high number of rentals.

If you continue on Lake Drive past Knapps Cut Off bearing left and then take a right you come to Crest Forest Drive and this commercial area is known as “Top Town”. A right turn at Crest Forest Drive will take you out to Cedarpines Park past other residential areas of Crestline not included in the other areas already mentioned.

Cedarpines Park begins about 10 minutes drive outside of downtown Crestline and continues for about another 10 to 15 minutes where the homes in this community disperse into open land again. Cedarpines Park has a more rural feel and there is more undeveloped land.  All homes in Cedarpines are on septic and water is by the share from Cedarpines Park Mutual Water Company. Most properties come with water shares. If not, then the shares are $500 per 3000 sq. ft. of land. Valley of Enchantment has its own water company as does the rest of Crestline called Crestline Village Water District.

If you make a left on Crest Forest Drive instead of a right, there are a few other residential areas not mentioned like the ‘Planets” section accessed south of Crest Forest Drive via Skyland Drive. From Skyland you get to all the planet streets such as Venus, Saturn, Jupiter, etc., many of which have roads that are not paved or maintained but many homes in this section have very nice city light views. Skyland itself is plowed in the winter. Most of this section is on septic but has natural gas and Crestline Village water.

Then drive a little further west on Crest Forest and you will come to a lovely little neighborhood known as Horseshoe Bend on the right. Mostly older homes but also some spectacular newer homes and many if not most have an incredible city light views of all of San Bernardino below. Horseshoe Bend has a yearly association fee of less then $300 and few rules as I understand it. This community also enjoys 17 acres of open land that is common area for the residents of this lovely spot on the mountain.

Then lastly there is a little neighborhood called Arrowhead Highlands on the left as Crest Forest Drive comes to an end and empties onto Highway 18. The Heights has mostly smaller, older homes and some of the streets in this area are not paved and can get pretty rough. Much of this area is also not plowed in the winter months, especially the area closet to Lake Gregory Drive where a street called Island allows entrance into the west end. Both the Highland area and Horseshoe Bend are septic areas which saves the home owner the ever-rising price of sewer/sanitation currently at $53 per month. Both areas have natural gas and city water. 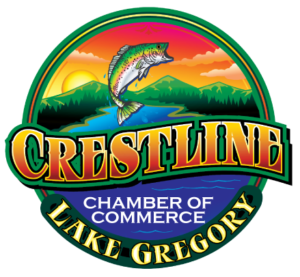